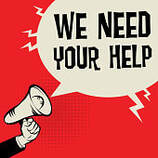 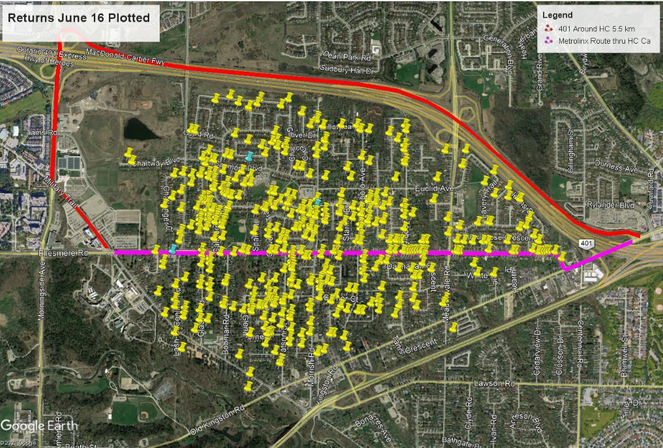 A pin map of residents who have signed the petition. The purple line indicates Metrolinx's proposed route for the BRT, while the red line indicates the HCCA's counter-proposal
In April, we plan to start a new campaign with lawn signs and banners. If you still have a lawn sign in your garage from last summer, join us and place it on your lawn. Send us an email at myhighlandcreekcommunity@gmail.com if your lawn sign bracket is broken and we will work to replace it.

The HCCA – DSBRT Committee submitted a report recently to the Minister of the Environment in response to the Metrolinx – Transit Project Assessment Process report.

The full Metrolinx report is available online on our website at www.myhighlandcreek.org. A copy of the report can also be viewed at the Highland Creek branch of the Toronto Public Library.

The following are abbreviated excerpts from the Highland Creek Community Association’s report submitted on February 22nd, to the Minister of the Environment for review. It emphasizes the HCCA’s and the community’s opposition to the DSBRT along Ellesmere Road. Excerpts from the Arborist Report are also included.

We highlighted that Highland Creek is strictly a residential area. Homes are purchased for the idyllic feel, its safe and clean environment and the mature tree-lined streets. The trees are home to a large variety of birds, and in the conservation area on Ellesmere Road there are several species of wildlife. Our residents expressed concerns over the impact that the proposed DSBRT will have on their community, and in particular on Ellesmere Road. Over 300 hundred lawn signs were displayed that promoted the “Stop the Durham/Scarborough Bus Rapid Transit”.

The DSBRT-proposed centre median transit lanes on Ellesmere Road in Highland Creek will:
Reviewing the submission by Metrolinx, the HCCA considers the two most important issues related to be climate change and the removal of trees, many of which are on private property.

Climate Change —The Impact of Tree Removal
The DSBRT route is 36 km long: The loss of these trees will have a huge impact on the health and wellbeing of all residents along the DSBRT route. The City of Toronto Council, in 2012, adopted a goal of 40% tree canopy. Toronto's urban forest provides $55 million in environmental benefits every year including improved air quality through pollution removal.

​Impact of Air Quality Noise on Residents of Highland Creek.
The following are residents who will be directly affected by CO2 emissions plus unburned carbon gases (black smoke) from diesel buses:
The Highland Creek residents have clearly stated they are against the DSBRT on Ellesmere Road, and the median centre lanes for buses.
When asked, Metrolinx could not cite another express transit system passing through a residential area in Canada. The health and well-being from the diesel emissions, noise, and vibration from the buses, could seriously compromise Highland Creek residents’ health.
During a meeting with Metrolinx, on February 16, 2022, and the HCCA – DSBRT Committee at MPP Vijay’s office, the following items were discussed.
If you have questions concerns regarding tree removal and/or air quality, contact:
MPP Vijay Thanigasalam, Scarborough – Rouge Park :416-283-8448 vijay.thanigasalam@pc.ola.org or info@vijaythani.ca
Gary Anandasangaree MP, Scarborough – Rouge Park 416-283-1414
Jennifer McKelvie – City Councillor – Ward 25: Scarborough – Rouge Park 416-338-3771
The HCCA-DSBRT Committee:  myhighlandcreekcommunity@gmail.com

Learn More ABOUT THE PLANS  Here

Over the past year 'The Villager' has reported on the Durham Scarborough Bus Rapid Transit Plans, find the articles here
Go to Bottom of Page for Article on BRT from 'The Villager' SUMMER 2020 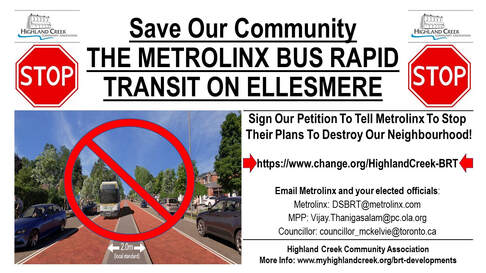 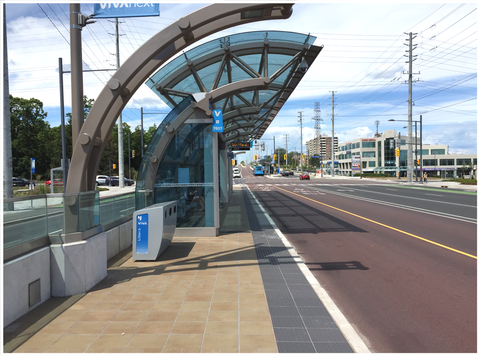 Photo: Metrolinx Bus Rapid Transit (BRT) on Mulock Dr. & Yonge St. Newmarket, through a commercial area. No project of this kind has been constructed in Canada through a residential area.
TAKE ACTION:  DO NOT LET METROLINX DESTROY OUR COMMUNITY
METROLINX BUS RAPID TRANSIT PLAN -  ELLESMERE CORRIDOR UPDATE
( Article from Summer 2020 Villager News )
By Douglas Phillips
Since our last article on the Durham-Scarborough Bus Rapid Transit Project in the June/July 2020 edition of The Villager, there appears to have been little progress on this project, except Metrolinx’s affirmation that the project is proceeding, as stated in their July 2020 Metrolinx Newsletter. They state that due to COVID-19, meetings have been delayed and will be virtual events in the Fall. The Highland Creek Community Association has again requested a public meeting when safe to do so, but again Metrolinx has refused; they will only host online conferences.
Technical Studies Underway
According to the Metrolinx newsletter, technical studies underway include: Archaeology, Cultural Heritage, Fluvial Geomorphology, Natural Environment, Noise and Vibration, Traffic and Active Transportation, Socio-Economic and Land Use, and Stormwater and Hydraulics. Are Ontario taxpayers getting value for their money, and why are promised studies still not complete?
Metrolinx Bus Shelter and Bus Route
For the Highland Creek community to better understand Metrolinx’s plans for the Ellesmere Corridor, we recently visited their project in Newmarket. This express route is 2.4 kilometres in length and runs from Davis Drive south down Yonge Street. It then converges into regular four-lane traffic to Aurora. After many years of construction, this project has just been completed.
This is similar to what we can expect in our community. The bus shelter is a standard Metrolinx design, and has been used on other Metrolinx projects. The transit system is operated by the York Regional Transit System called VIVA and operates in a commercial area. No Metrolinx bus lanes were constructed through the residential part of the Town of Aurora. It should be noted that no other Metrolinx project is on a residential route – the Ellesmere Corridor is the only planned one in Canada. The Ellesmere corridor from Kingston Road to Military Trail spans 2.85 Kilometres.
Air Quality
We noted that the VIVA diesel buseswere very noisy, the same as the PULSE buses running in our community. This brings us to the subject of air quality. “Air quality has significant impacts on public health, the environment and economy. Air pollution contributes to illnesses such as heart disease, stroke, asthma, lung disease, and lung cancer … Exposure to air pollution in Ontario results in increased hospitalizations, as well as 6,700 premature deaths, every year” (Per The Office of the Auditor General of Ontario — An Overview of Environmental Issues — 2019 Report).
Apart from the TTC buses, Metrolinx will still run their regular buses but also plan to run buses every 5 minutes during the rush hours, 6:30 to 9:30a.m., and 3:00 to 7:30p.m., then up to every 2 minutes based on demand. The air quality and pollution should be of grave concern to all the residents of Highland Creek, and especially those residing along the Ellesmere corridor, as well as those with preexisting health conditions.
Hazards
It is essential that there be NO physical barriers to impede the fire engines and ambulances along the Ellesmere corridor. Minutes saved could mean the difference between life and death.
“Pinch Point”
Metrolinx has not given any update on how they will deal with the Kingston Road onto Ellesmere “pinch point”.
Boulevards
Metrolinx has already made it quite clear that they own all the Ellesmere corridor boulevards, including where all our mature trees grow. They will take away all the residents’ extra parking spaces. Will people have to find alternative accommodation? This could be a real hardship for many, and residents need to know a timeline for this project. They cannot be left hanging for years, such as was the case in Hamilton. Studies need to be completed and decisions made.
Take action!  Call or write to your Government Representatives. Do not let Metrolinx destroy our community.